An electro-mechanical siren is a fairly simple device. It consists of an electric motor which turns a fan called the "rotor" or "impeller", spinning inside a slotted drum called the "stator".

The first job of the rotor is as a centrifugal fan. It pulls air into the siren axially through the intake, and blows it out radially through the holes in the stator. The second job of the rotor is to chop the incoming air stream into impulsive bursts. The rotor is segmented by vanes that periodically cover and uncover the holes in the stator. Each time the rotor and stator holes align, a burst of air is forced through. The frequency of these bursts is the pitch of the siren.

The siren in the diagram to the right is my dual-tone Model 2. To create two distinct tones, this siren has a two-level rotor and stator assembly. The top half of the rotor has 5 vanes, and the bottom half has only four.
Side note: The above siren animation is way slowed down. In actual use, it spins at over 7000 rpm. No wonder Federal puts those big DANGER OF AMPUTATION! signs on these things!

What Gives the Siren its Unique Tone?

The siren gets its unique tone, or timbre, from the from the shape of the sound wave it produces. The chopping action of the rotor produces a triangular waveform that is rich in both odd and even harmonics. The first few harmonics are especially strong. The waveform below is from a single-tone 580 Hz fire siren.

Below is the spectrogram of this single-tone siren sounding, from beginning to end. The bottom-most green line is the fundamental tone, which peaks at 580 Hz in the middle of the image. Each green line above this is a harmonic multiple of 580 Hz-- 1160 Hz, 1740 Hz, etc... As the frequency goes up the power in each harmonic is less, shown by the diminishing brightness of the lines. 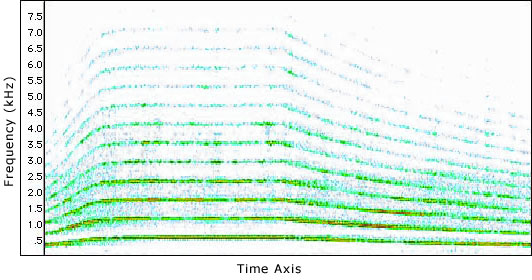 Most tornado and fire sirens being made in the US today are single tone sirens, but the classic "air raid tone" from WWII and Cold War era sirens is that of a dual-tone siren. The earliest dual-tone sirens made by Carters of England had a single motor mounted horizontally with a rotor/stator assembly on either end. One rotor had 10 vanes, while the other had 12. This 6 / 5 vane ratio corresponds to the musical interval of a perfectly harmonic, or Just, Minor Third. Many Civil Defense sirens in the US also sound this interval.

It is important to note that this is not the same Minor Third pianists are used to hearing. Modern keyboard instruments such as the piano are tuned by "Equal Temperament", a tuning that compromises some harmonic intervals in favor of easy transposition between keys. A detailed explanation of microtonal scales is out of the scope of this website, so just know that the siren's third is more "pure" than your piano's.

Of course not all dual-tone sirens sound a Minor Third. The Model 2 animating above has a 5 / 4 ratio, which is a Major Third. This sounds a bit less foreboding than a Minor Third. Some of Sentry Siren's sirens sound a full octave, and I have an example on my Sounds page of a Model 77 fire siren which produces a 2nd interval from a 9 / 8 ratio.